The British band the Immaculate Fools formed in London, England, in 1984, comprising 2 sets of brothers Kevin Weatherill (lead vocals, rhythm guitar),  Paul Weatherill (bass) Andy Ross ( lead guitar and keys) Peter Ross (Drums). Although the group had success in Britain, with two chart topping singles and many tv appearances including ‘the tube’ , their hybrid of Celtic music, folk, and alternative rock found even more attention in Spain and Germany. In 1987, their LP Dumb Poet was released in Europe and America by A&M Records and the Psychedelic Furs-esque track ‘Tragic Comedy’ was a hit on college radio all over the US. The line up changed in 1990 when the brothers Ross parted company. Andy Ross stayed on to design and build a residential studio for the band and went on to produce their next two albums the first of which reaching ‘gold’ sales in Spain. Shortly after they toured with Bob Dylan, Iggy Pop, Simple Minds, the Stranglers, and the Rolling Stones; however, they grew tired of the English music scene in the late '80s and relocated to Spain, where they were superstars. In 1997, the band broke up after lead singer Kevin Weatherill departed from the group. Calling himself Dirty Ray, Weatherill abandoned the Immaculate Fools' Celtic touches for gritty blues on his solo debut ‘Primitive’.

‘Hearts of Fortune’ was released on A&M records in the winter of 1984. Their debut album met with critical acclaim throughout the industry. 80’s aficionados will remember the chart toping single ’immaculate fools’ an anthem that led the way to 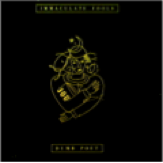 Never give less than Everything

Wish You Were Here