This is the 4th release from a body of work made by the talented young singer writer producer Charlie Tait under the name Cambio sun. I mentored and worked on the finishing details and mixing, but the production is Charlies work. A quater of a million hits on soundcloud and counting

This track is the first release from the forthcoming album  STILL LIFE TEMPLE by CODA1 on VBeat Records. I made this record 18 years ago but has been reserected as is due for re-release early  2015 .Its also my first dabbling in music video edtiting

TRACK : MAD AS THEY COME

This is the 2nd release from a body of work made by the talented young singer writer producer Charlie Tait under the name Cambio sun. I mentored and worked on the finishing details and mixing, but the production is  Charlies work.

TRACK :  WEIGHT OF THE WORLD

This is the 1st release from a body of work made by the talented young singer writer producer Charlie Tait under the name Cambio sun. I mentored and worked on the finishing details and mixing, but the production is  Charlies work.

This is the 3rd release from a body of work made by the talented young singer writer producer Charlie Tait under the name Cambio sun. I mentored and worked on the finishing details and mixing, but the production is  Charlies work.

An amazing voice from an underated talent. Unfortunately I didn't get to finish these recordings but felt the need ot put this on the site for people to hear his unique and capivatiing voice.

Sketches around peice in development for future project

Sketches around peice in development for future project

This was a major work for me and took some time to complete. Its an instrumental composition for choir, solo voice,strings, tuned percussion piano, and computer. I was in talks with a view to a live performance at the Barbican London involving the Crouch End Festival Chorus but sadly didnt' quite come off. So it has never been performed.

In 2009 I met Ray, an 86 year-old cattle farmer living deep in the rural heartlands of New South Wales, Australia. Subsiquent meetings inspired me to write this musical portrait of and extra ordinary man.

This is the fist film I have ever made and its worth giving some context. I had just arrived in Australia and was looking for work when a strange offer came my way.  I was commissioned to compose music that might articulate the issue of drought the farmers in NSW where dealing with. I was totally out of my depth and so asked if I could spend time on a sheep farm so I could learn somthing of their world. I happened to take a cheap little camcorder with me so I could document this strange new experience. It wasn't supposed to be a 'proper' film I just wanted a video diary for my self. But gradually I realised that the story I had unwittingly caught on camera would speak more honestly than any music I could compose. If I could piece it together and learn to edit the footage I might able be tell a story that says something about the issues through film. It was an extraordinary experience to make something without setting out to.... A great lesson for me all round and an experience I will never forget. The film has gone on to be used as a show case item for many environmental organisations. Funny thing is I'm not an environmentalist and I know nothing about farming !... one of those moments when you say ' how the hell did this happen!' 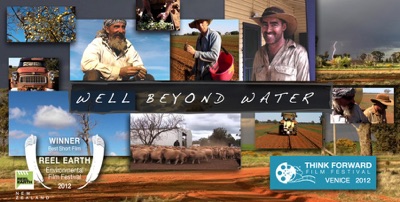 This is the trailer for the film.

Back To The Top

SYNDEY, AUSTRALIA. – After working with the likes of Paul McCartney, Howard Jones, Dave Gilmour. and Robert Palmer, British born, Australian-based producer Andy Ross has stepped from behind the console to create

“…a hugely ambitious project…the album includes a collection of ten songs deeply rooted in British rock of the 1970/80s with nods towards the subtle mix of sonic washes and accessible rock sensibility which characterise the work of Pink Floyd, 10cc, Yes, Godley & Creme and Howard Jones – the latter of whom features in the movie and who has worked extensively with Ross. The documentary interleaves interviews with a wide range of thoughtful people with the story of a man who leaves his work and goes searching for meaning in his life.” – Sunday Arts Magazine (Australia)

The music on the album, The Fear Engine (out now), encompasses elements of alt rock, cinematic, and pop music as each of the ten tracks is framed around a different question introduced by dialog aiming to illuminate The Fear Engine, an unconscious driving force within us. Recorded at his home studio in Sydney, Andy Ross plays all the instruments plus vocals on The Fear Engine album with the exception of saxophone, he left that task to John Helliwell (Supertramp). After all, his father was Ronnie Ross, a renowned British musician who not only played sax with many jazz legends (and played sax on Lou Reed’s “Walk On The Wild Side” and The Beatles "Savoy Truffle") but who also taught the sax to a young David Bowie.

In the film, a cross section of people from artists (musician Howard Jones, screenwriter Simon Beaufoy, photographer Laura Solomon), scholars (professor Hugh Montgomery, philosopher Alastair Rylatt), innovators (founder ‘Choir With No Name’ Marie Benton, green builder Steve Epstein) to everyday people and children attempt to answer ten probing questions on the nature of human behavior, while an ordinary man in a suit and carrying a brief case with a silver ball representing his subconscious fears hovering around him (also on the album cover), walks from a city into the wilderness - a metaphor for the human desire for significance.

KEEP UP WITH ANDY ROSS

THE FEAR ENGINE  documentary film  poses 10 probing questions to a handful of individuals on the nature of human behaviour and how we might make the world a better place. What is preventing us from achieving a more harmonious world?

THE FEAR ENGINE  concept album contains 10 songs addessing 10 questions that ask how  we might make the world a better place.

WHAT IS THE FEAR ENGINE?